Heatmiser Underfloor Heating (Things I wish I knew before) 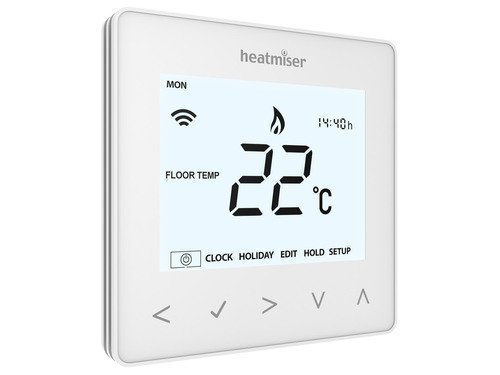 So you have decided to do a lovely underfloor heating install and have chosen Heatmiser!  £1000, two manifolds, two RF wiring centers and 10 thermostats later, your heating doesn’t work properly.  Congrats.  Here’s a few things to help you along the (confusing) way.  I’ll add to this as I find more stupid things with the system.

Controlling more than one zone with one thermostat

Question:  I have a MASSIVE living room that requires two zones to heat!  I’m so rich!  I want it controlled by one thermostat.  Make it happen.

So initially I thought, hey just pair it with two zones, right?  Surely there is a Primary zone, Secondary zone etc.   Nope.

You see that there are two sets of Live and Neutral terminals on the board?  Yea, you gotta do it that way.  Link your thermostat to ONE zone.  Wire all of the actuators (up to four I believe) into that ONE zone using those four (2 Live 2 Neutral) terminals and there ya go, loads of zones, one stat.

For some reason I thought it would be more… high tech than this, controlling things in software.  Alas it’s back to the old electrical connections to set this up!

The VALVE controls the PUMP

Separate manifold for upstairs and downstairs.  Everything wired in from the upstairs wiring center to the downstairs one, just like they told you over the phone.  It calls for heat… Success!  Wait… Why is the pump running downstairs when none of the rooms are calling for heat?  Y’all got the wiring set up wrong!

The way I fixed it was to install one valve per manifold.  Wire the valve terminals to this valve and they will operate independently.  If you wire them both to the same valve, the pump will turn on even when the zones do not require circulating and the actuators are shut.

Probably says it in some documentation somewhere, couldn’t find it.

When my batteries run out my heating comes on?!?!

So Heatmiser have thought about failsafes.  You never want your system to freeze right?!  Correct……. But.  What happens when your batteries run out?  The heating for that zone is automatically turned on.  Doesn’t matter if it’s 30 degrees outside, your heating is on.  This is what happened to me this summer, I came home to get out of the summer heat and…. my bedroom was like a sauna.  Not good.

So how do you get around this?

On the NeoAir there is an option for a failsafe that is turned on by default. To turn it off do the following:

This must be done for each thermostat.  Now the failsafe is off.  The other nine thermostats in my house will warm it up if one runs out of batteries.

The interesting thing I learned about this was that the Heatmiser app does not send you a notification if there is a low battery warning on a thermostat.  You have to check the (shockingly bad) app or look at the stat itself.  Surely the point is to set and forget and let it automate itself?!